I grew up with a Mom that was (and still is) and incredible gardener. Although I don’t think she’s ever gotten that officious title of Master Gardener, she truly is one and has the extensive gardens to prove it. She has that uncanny ability to take a scrawny, dead looking twig and infuse life into it to the point that the next thing you know this huge plant bursting with color and vitality where a stick used to be. I seem to have inherited the polar opposite ability. Not sure which side of the family tree to blame my black thumb on so it shall remain an unclaimed orphan. Unlike my Mom my gardening skills lie in the realm of taking perfectly hearty and healthy plans and turning them into dry, dead twigs.

So, I dream. I dream of a gorgeous yard filled with beautifully arranged flower beds. I dream of that organic, mostly weed free garden erupting with fresh produce. I dream of window boxes with colorful flowers dancing in the breeze. Of culinary herb beds just outside my kitchen door.

In the three years since we moved to TN I have managed to grow some things. I wouldn’t exactly say anything I grow thrives per say but at least it isn’t dead within a matter of weeks and occasionally manages to produce what it is intended to produce. After three years of working on the soil, weeding like crazy I have for the first time a garden that is day dream worthy.  It survived the flood without being washed away and decided to erupt in glorious growth with all the water! Just don’t look too close. The weeds are still ever present, and some of the plants have gone rogue but it’s so beautiful and so alive I love it anyway.

Thought I would share some of my favorite photo’s which are something like documentation of personal triumphs for me. Each plant that is alive is a victory!

Herb Garden with Fountain in the middle

My herb garden has been a challenge. Some herbs have gone crazy taking up way more than their fair share of space while others struggle along clinging to life.

One of the wee herbs struggling for life: Borage 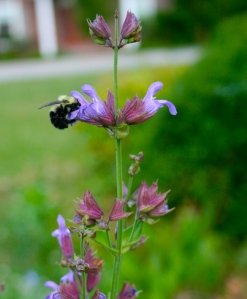 Bumble Bee Partaking of green Sage bloom. Apparently Sage is super hardy because I can't kill it and it's thriving on neglect.

Rue! Glorious Rue! This grows wild in some places. Has the most delectable smell. Is a medicinal Herb. 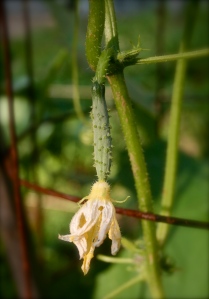 Veggie Garden and back yard overview

I hope to be sharing recipes and research as I learn how to harvest and use the various herbs and veggies. In the meantime does anybody have an incredible (preferably cultured??) recipe for Green Tomato Chutney? I’ve never made it before but would like to try.