In a past life I was very active in the Republican Party and would be classified as a classic conservative, right winger, fundamentalist and whatever other title seems appropriate. Needless to say, earth friendly anything hasn’t traditionally been a leading issue for that political side of the house. However a verbal emphasis given to fiscal responsibility and dare I say it tightwadism has been. Interestingly enough as my lifestyle has become more and more “green” over the past few years I have realized that taking responsibility for the earth’s resources as a consumer doesn’t mean that you are anti business, anti budget, anti american economy at all as some of the right wing rhetoric would have you believe. To the contrary when done wisely and prudently going green can be very compatible with tight budgets. A core principle of the natural/alternative grassroots movement that is happening right now is to support local, small businesses. As a small business owner at  www.beeyoutiful.com I am particularly appreciative of the effort that it can sometimes take for an individual to go out of their way to support the quality of small business vs. the convenience and or price point of big business. But this blog isn’t about politics or political views. It’s supposed to be about food. Bear with me, I’ll get to food eventually.

Going green for me has been a huge learning curve. The concepts of the green shades that have crept into my life here and there are not new at all they are old and most of them based in centuries of common sense traditions. Concepts I’ve been exposed to in my lifetime by my Grandparents and even my parents. Their importance however has been lost in the face of an increasingly overwhelming world where an easy button for everything is all we wish for and convenience is the watch word of society.

By some standards I haven’t even begun to arrive at green but one baby step at a time I think I’ll get there. Check back in with me in a few years when I have the solar powered hobby farm of my dreams.  Thought I would share some of my least painful and basic lifestyle changes. Some would disagree that these are purely green and they would be correct. The pursuit of a health restoring and maintaining lifestyle from a nutritional standpoint has been far more compelling than either caring for earth’s resources or a budget. That is the overwhelming motivation that will come through in many of these points. But, I think you will discover as I have, that many healthy choices, are green choices and are also budget friendly choices. Given enough time and sufficient little things changed from what the normal frenzied consumer based American lifestyle is there are dozens of symbiotic relationships and crossover benefits that begin to emerge. This is a fairly recent and altogether delightful discovery for me personally.

Cloth diapers have been a HUUUUGE learning curve for me. I have to say in spite of the lure of the fluffy cuteness in all sorts of patterns all created to highlight the utter adorableness of the infant they adorn I was not a fan. Being the avid…Ok ok…Compulsive reader that I am some references that some fair skinned babies more frequently beginning to have troubles with disposable diapers passed before my eyes.  Assessing the gene pool that our poor kid was being created from I concluded that something inbetween glow in the dark and marshmallow would probably be the dominant pigmentation so figured that taking some precautions might not be a bad idea. Not knowing the first thing about cloth diapers and finding the terminology baffling I bought a lot of what I thought sounded like a great deal on newborn sized diapers off of craigslist.  As it turns out I was really grateful to have that particular little bit of obsessive preparation in place. We ran through every brand of disposable diaper out there and ended up with cloth like it or not because it was the only thing her skin would tolerate without breaking out into a horribly painful and red rash. As time went by I became more and more of a fan and learned through trial and error what prefolds vs. AIO’s vs. Pockets were and the various merits of aplex vs. snaps.

Don’t ever get a seasoned cloth diapering Mom started on hemp vs. cotton vs. bamboo vs. microfiber vs. any combination of any of the above unless you wish to be sucked into the black hole that is the cloth diapering world. Unlike the plastic pants and pins of my parents generations cloth diapering options are genuinely limitless now and are generating enough interest that if you are smart about it you can get a decent collection of high end and user friendly stuff while keeping the budget not only intact but actually freeing up some extra cash. This is one of those win win win things to do. It’s great for the environment (think about all the landfills being spared the bags full of your kids plastic wrapped waste) It’s great for the budget even with one kid but the savings sky rocket if you use them with a second. Last but certainly not least I am personally convinced it is the optimal health choice for the baby as well. Disposable diapers are increasingly toxic and it explains why more babies are unable to tolerate them than in times past. Well, that combined with increased environmental senstivities due to being born to parents with chemical overload.  Sorry, rabbit trails are a must this late a night.  Back to Diapers… Use an high efficiency washing machine and line dry the diapers and the impact on the environment will be even less for those of you that care.  I leave you with my last and final point on the whole diaper subject. Nothing is cuter on a baby than cloth. Nothing. See photos below for evidence.

Doodles in Haute Pockets One Size Fits All pocket diaper 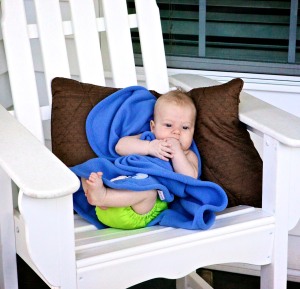 Glass So this may seem basic and overly simplistic but one of the most green things I’ve done in the past year is to go plastic free. The Tupperware was given away, the plastic canisters disposed of. In their place I invested in several sets of (very much on sale) Pyrex glass with snap on lids, gallon wide mouthed jars with lids, and save every glass container with a lid that comes into our posession. The main driving force of this decision was in an attempt to remove the hormone disrupting properties that leach from plastic into our foods (particularly plastic anything that is heated) so that my body could begin to hopefully regulate itself without the negative extra components mixing things up. I can’t really claim that this one has been a boon to the budget. By biding my time and stalking some good deals at the ed of the day I’ve pretty much broken even with what decent quality plastic stuffage costs. I still use food grade five gallon buckets to store my bulk/dried items in. My primary concern is that anything that is enzymatically or bacterially alive in a liquid base like Kombucha, or food items that will be heated and cooled and or stored long term need to be in glass. All for health reasons. I think there is sufficient general knowledge out there regarding the manufacturing process of plastic that I don’t need to cover that ground yet again here in regards to the Environmental impact. So, I chalk Glass up as a win for two out of three. Health and Environment. Neutral on Budget.

Garden The foodies among us quiver with delight at the mental image of garden fresh produce. The budget minded beam benevolently at the savings a garden can afford and the environmentalists delightedly chortle about the positive impact of bio dynamic gardening. This really leaves just the black thumbs among us to still be convinced that a garden is a worth while waste of time, er, I mean, wise investment of resources. Being the shamed possessor of a black thumb myself and a badge carrying member of the Exclusive Excuse Clubs of “I don’t have enough space for a garden” and “My soil is poorer than Haiti” please believe me when I say you have my utmost sympathies and understanding. However even for me the effort of a garden outweighs the staggering frustrations and failures. Some success can be managed with some creative problem solving and at the very least it gets you outdoors and active which counts as a plus on the Health front even if the veggie garden never actually produces anything more than nutrient dense weeds.

Kitchen I am convinced that nothing is more healthy, beneficial to the budget or earth friendly than getting re acquainted with the kitchen. Kick the microwave out. Welcome the Toaster oven in. Seriously. Unproven and as of yet anecdotal and theoretical serious health ramifications aside a microwave just makes it too darn easy to cheat with food. The preparation of genuinely from scratch food (No, this does NOT include Duncan Hines. Seriously people. Mixes do not count as homemade, it’s cheating plain and simple. Got that?? Some exceptions allowed. It’s my blog. I can do that) is a lost art and along with the flavor, fellowship and textures that have been lost we’ve also lost the knowledge and ability to prepare our foods in ways that our bodies can actually access the health sustaining nutrients inside.

As oblivious as most of us are to this reality there are actually compelling and scientifically viable reasons for many traditional food methods of preparation as time consuming as they were. There are the right ways to prepare certain foods that unlock the full range of nutrients in such a way that our bodies can easily utilize them. Neutral methods that neither unlocks their full potential nor blocks it off and then the really bad terrible horrible awful way of treating food that basically blocks off our bodies ability to access anything there and actually utilize it in a helpful way. The worst effects of the poor methods is that it actually mutates the food on a basic cellular level so that it not only fails to support health it actually harms it. So that covers the Health front of things. For the Budget, cooking from scratch = less time eating out and less out to eats = less money spent. Unless you are eating off of the McDonald’s Dollar Menu in which case I have to wonder what on earth you are doing reading a blog like this in the first place.  As for the Green impact of kitchen re prioritization if done correctly it can be enormously beneficial. Mostly in regards to how it is supplied, stocked and how energy resources are managed and maximized. Details, tips, tricks on that is another mammoth post for another occasion.

There are many more areas of Green improvement in my life that have evolved over the past few years but my brain is weary and you my dear reader have successfully toughed through somewhere in the ballpark of 2000 words according to the handy dandy word counter that WordPress provides. That’s a lot. Way too much. I apparently like to see myself type. Probably almost as much as I like to hear myself talk. At least I’m easier to tune out in text than in cinematic full color glory with the audio cranked up.  Be glad it’s a text blog and not a video blog.

2 thoughts on “Thinking in Shades of Green: The Never Ending Monologue”